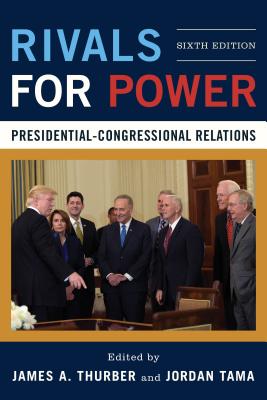 Despite the fact that Republicans control two of the three branches of government following the election of Donald Trump, the relationship between the president and Capitol Hill continues to be strained. Underscoring the book's theme that the executive and legislature regularly compete and clash-even when controlled by the same party-already tensions are emerging between President Trump and the Republican congressional majority around the Affordable Care Act, infrastructure spending, trade agreements, relations with Russia, and immigration and refugee policy. Now in its sixth edition, Rivals for Power: Presidential-Congressional Relations brings together the knowledge of leading scholars and scholar-practitioners alike to explain the complex political dynamic between the president and Congress in new chapters. Contributors analyze the structural, political, and behavioral factors that shape this relationship, while showing how and why rivalry has tended to intensify when different parties control the two branches. Intended for students, scholars, public officials, and the general public, Rivals for Power offers an accessible and engaging analysis of executive and legislative rivalry across a span of eras, with particular attention to developments under recent presidents, including Trump and Obama. Contributors include Gary Andres, Ross K. Baker, Sarah Binder, Patrick Griffin, David R. Jones, Douglas L. Kriner, John Anthony Maltese, James P. Pfiffner, Jordan Tama, Claudia H. Thurber, and James A. Thurber.