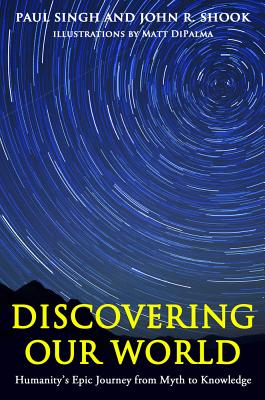 Where did everything come from? Why are humans so biologically similar, and why do we let small differences divide us? What shall determine our destiny?  Paul Singh and John R. Shook draw on the latest findings from the physical and biological sciences, astronomy and cosmology, geology and genetics, and prehistory and archeology in search of answers. As they lucidly and engagingly demonstrate, the answers science gives about ourselves and the universe in which we live are incomparably more surprising and interesting than any mythical tale about some clash of titans or calculating creator. Indeed, science’s proud journey of exploration and discovery is humanity’s finest narrative yet, about how we trusted our intelligence to find out what we really are and who we can be—intrepidly going wherever the evidence led. Even though science reveals that humanity may have no special place in the universe, humanity is truly special because of our ability to comprehend our universe. Thus, this inspiring story of exploration and discovery is a celebration not only of science—of science’s knowledge of the world, and of science’s own journeys to gain that knowledge—but also of ourselves.

Paul Singh is a professor of obstetrics and gynecology at the College of Medicine, University of Science, Arts and Technology at Montserrat, British West Indies. He is the founder president of Singh Global Initiatives, a philanthropic organization that promotes health and science education worldwide. He lives in Menlo Park, California. John R. Shook is a scholar and professor who has authored or edited more than a dozen books, including The God Debates: A 21st Century Guide for Atheists and Believers (and Everyone in Between). He lives in Arlington, Virginia. Matt DiPalma is a designer and illustrator. He lives in Gainesville, Florida.

“A clear and engaging look at the greatest story of all—how we came to (finally) understand who we are and what our place is in the universe. The millennia of false starts and missed guesses are treated as a lack not of intelligence but of a reliable way to interrogate reality. The book captures the questing curiosity of earlier humanity, then conveys the astonishing feeling of sudden acceleration as science filled the slack sails, revealing at last who and what we really are. This is a marvelous, accessible contribution to the literature.”  —Dale McGowan, PhD, executive director, Foundation Beyond Belief, and coauthor, Raising Freethinkers

“Paul Singh and John Shook show that the truth about the origin and nature of our world is much more enchanting than myth. Their message is clear: the significance of human existence lies not in seeing ourselves as uniquely privileged beneficiaries of a universe created especially for us, but rather as fortunate participants in a rich, natural—and true—narrative of a remarkably beautiful cosmos. And just as they are candid about the shortcomings of religion without being dismissive of it, they rightly applaud the successes of modern science without being uncritically worshipful of it.”  —Barbara Forrest, professor of philosophy, Southeastern Louisiana University